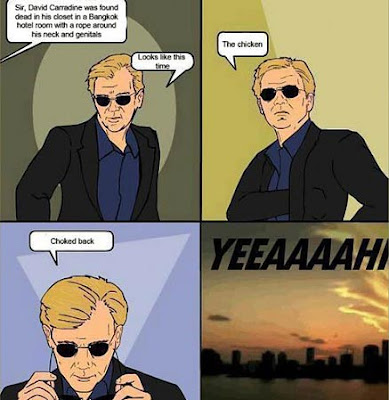 From the Bangkok AP: The body of American actor David Carradine, best known for the 1970s TV series “Kung Fu,” was found in a hotel room closet with a rope tied to his neck and genitals, and his death may have been caused by accidental suffocation, Thai police said Friday.

Police Lt. Gen. Worapong Chewprecha told reporters that Carradine was found with a rope tied around his genitals and another rope around his neck.

“The two ropes were tied together,” he said. “It is unclear whether he committed suicide or not or he died of suffocation or heart failure.” [AP Bangkok]

WOW, he went out doing crazy sex acts with a Bangkok hooker. Of course that's my view of how it all went down. Poor Robert Carradine (David's brother and Louis from Revenge of the Nerds) will now have an even greater complex having to live up to that death. It will have to be nothing short of him, Booger and Lamar flying a helicopter on fire into a titty festival.
Posted by YESH at 5.6.09

Say what you will...but at age 73 he was still into the kinky stuff. Props.