My nightmares have come true 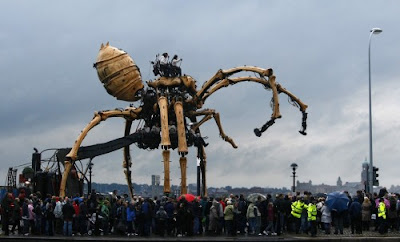 So it looks like people are creating GIANT ROBOTIC SPIDERS now. Great! Just what we need a 50 foot spider to turn on us and kill millions before Will Smith can stop it.

A giant mechanical spider, part of a piece of free theater by French company La Machine entitled “Les Mecaniques Servants”, walks along the waterfront in Liverpool, England on September 5, 2008. The 37-ton spider which stands at 50 feet (15 meters) tall was in Liverpool as part of the city’s European capital of culture celebrations.”
Posted by YESH at 28.12.08