I'm off work this week, so lets get this started...Romancing the Stone REDUX. 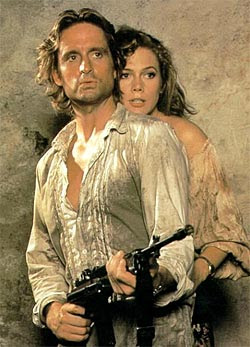 Get ready for another remake. This time, it's something that held a dear place in my heart. Romancing The Stone was a great movie from my youth, 1984 starring Katheen Turner, Michael Douglas, and the quintessential Danny Devito. I'm not so attached to the original that I'll be upset about it, but (in my opinion) is it so hard for Hollywood to come up with something that isn't a remake or retelling? Maybe it is and I live in a fantasy world. But I know I don't live in a fantasy world because I don't have Liv Tyler waking up in bed next to me. Daniel McDermott (Eagle Eye) will be directing it and released by Fox in 2011. Maybe he'll put Shia Labeouf and Megan Fox in it. You know...for the kids.
Posted by Downtown SteveBrown at 15.12.08